I'm still here!   I guess I got so boring I stopped blogging, not that I wasn't boring before but  you know what I mean.  Boring is good I guess.  We are still plugging along.  Still living day to day.  Still missing dh every second of every day.

Last time I updated (wow!  was it really January??) I was doing the 100 day challenge.  I finished it! Go me!!  But as soon as I was done with my 100 days I quit.  Boo me!   I felt a lot better for the exercise but I actually gained weight.  I just lost my motivation and quit.

The kids are doing good.  M will be starting high school in a few weeks. How in the world did my little baby girl become a high schooler?!??  She used to fit in my arms and now she's taller than me.  She's a tall girl, at least 5'9" last time we measured.

O will be in 3rd grade. I can't believe that either.  My little mama's boy is growing up. He's still obsessed with Legos.  Still got an awesome imagination and can build pretty much anything he wants to out of his Legos.  He gets that from his daddy.  Wes could build anything.  Only he used metal and wood and not Legos. ;)

I took the kids to Chicago in June.  Just the three of us on vacation.  I am proud of myself for going on our own but I decided I probably won't be doing that again anytime soon.  Until the kids are older I think I'll be asking my parents to come along on any future vacations that are more than an hours drive from home.  Just paranoid I guess but I hate the thought of something happening to me and the kids having to deal with it on their own.

So, I had written my New Year's resolutions. So far I've managed to completely give up on one, stick to one and half-ass the other.

I tried to do my happiness journal. I really tried. And it's not that I'm not happy. I am. Not like I used to be but my kids make me happy. Our kitten, Snow, makes me happy. But I suck at journalling. Um, hello. Have you read my blog? I suck at writing stuff down everyday. I knew that going in to it but for some reason I thought I would be able to do it. BUT! I don't feel like it was a total bust because even though I'm not writing anything down I do feel like I'm more aware of my happiness in general because of the idea of a happiness journal.

The one I've managed to half-ass is my eating/diet plan. I'm kind of sort of becoming interested in considering maybe thinking about doing it right. I usually do it right at lunch at work. Breakfast is meh and supper at home is a giant NO. I'm not losing but I'm not gaining either so whatever. I know what I need to do I just need to find my motivation again.

The one I feel like I'm kicking butt on is my get moving resolution. I'm doing a 100 day challenge I read about online. It's simple. Just move 30 minutes a day. Add 30 minutes of exercise that's not part of your daily routine. I've managed to do it every day so far for 18 days. Yay for me! This is the longest I've stuck to any kind of routine exercise and I'm kind of proud of myself.
Posted by Kim at 10:54 PM 3 comments:

I hate making New Year's resolutions. For the most part I don't do them but this year I've got some goals I want to stick to and I figured if they were in writing I might do better about sticking to them. So here they are:

1. Keep a happiness journal. I read this on a website I go to recently and I loved the idea. Keep a journal and just write done something that made me smile that day. Doesn't have to be anything big and nothing negative allowed. So if I didn't smile that day, nothing gets written down.

2. Move more. I am so pitifully out of shape it's not even funny. I'm not trying to become a super athlete or anything, I'd just like to be able to walk around with out getting winded.

3. Get back on my diet plan. Last year I did the 4 hour body plan and had great success with it. I fell off the plan due to several things, the number one being laziness. It's not hard or complicated at all and I need to get back on it.

I've got more stuff but those are my big 3. The things I feel like will have the greatest impact on my overall health and happiness so I'm going to put my main focus on those and I think the other stuff will fall in to place.
Posted by Kim at 9:44 AM 3 comments:

So, I'm having myself a pity party that last few days. It's Christmas and I miss my husband so very, very much. Don't get me wrong, I miss him every second of every day. But I've been missing him more than ever now.

Ok, I got off track of my whining for a minute. Wes always spoiled me at Christmas. I miss that. God, that sounds shallow. But I miss having him around for little things like that. I just miss HIM.
Posted by Kim at 10:31 PM 3 comments:

Just need to get this out

Sorry, vent ahead. I've got one co-worker who works everyday with me and another that works on average 1 day a week. Just whenever she comes in.

You might know how hard it is to do stuff at home when your husband is not around but you have no idea. At.all. Not even an inkling of an idea.

So, no. Just because you might go a few days without actually seeing your husband in person does NOT mean you know what it's like.
Posted by Kim at 10:24 AM 2 comments:

Here is our newest family member here in Happy Town. Meet Snow. She's tiny and adorable and we love her very much. 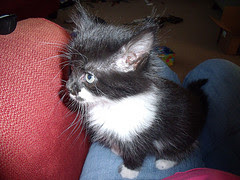 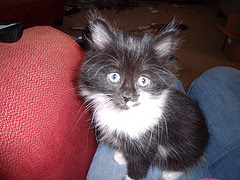 Wow, it's been a long time since I blogged anything. I need to get back to it, I've got some stuff rattling around in my head that I need to get out and blogging helps a lot. I have the number of a grief counselor I need to call but I haven't been able to make my self make that call just quite yet. I got a note from the counselor at my kids school with the number so I know I need to call because now it's not just me it's affecting my kids.

I have a cousin, I'll call him M, who's wife died of a suspected aneurysm when their kids were young. Younger than my kids were when their dad died. My cousin had two boys and although they have grown in to nice young men they both have serious issues that I feel go back to the loss of their mom. One is off and on drugs, probably more on than we know and the other was just lost for a lot of years. :( Another cousin remarked to me after my husband died how she wishes M would have taken his boys to counselling after their mom died. It was like a light bulb went off and I realized I don't want my kids to turn out like his kids.

BUT, that is easier said than done. I've found the human mind has a remarkable ability to shut off when painful stuff happens. I don't think any of us have fully dealt with the loss yet. I don't know if I'm ready to deal with it yet.

And in my next post, I'll introduce you to the newest love of our lives around here. (As soon as I figure out which one of our computers the picture is on.)
Posted by Kim at 10:04 PM 1 comment:

Kim
40 year old married mom of 2. Living in Oklahoma, wishing for the weekend.